Public policies and everyday urban lives. A perspective from children and adolescents’ experience

During the last six weeks I have been conducting fieldwork in Buenos Aires, Argentina. After my first year as an MA student in the Center of Latin American and Caribbean Studies, this trip represents an initial exploration that will contribute to my final Research Paper. It has been a great and busy time, where the challenges of the field implied an exciting process of reflection and reframing of my initial project.

Based on my previous experience as a State official, where I used to work with children in an extreme condition of vulnerability, I decided to develop my project around the relationship between social policies’ planning and their actual impact on reality. The objective of the project is to analyze children’s policies in the particular context of uneven urban areas, such as Buenos Aires City. Argentina is the second more urbanized country in Latin America; and Buenos Aires’ metropolitan region forms the 10th largest city in the globe. Interestingly, the American continent is the most urbanized area of the world, and also the most unequal region. Children are the most affected by this phenomenon; in the case of Buenos Aires while children and adolescents are the 23,2% of the population, they represent the 40% of its dwellers under the line of poverty (312,136 children). 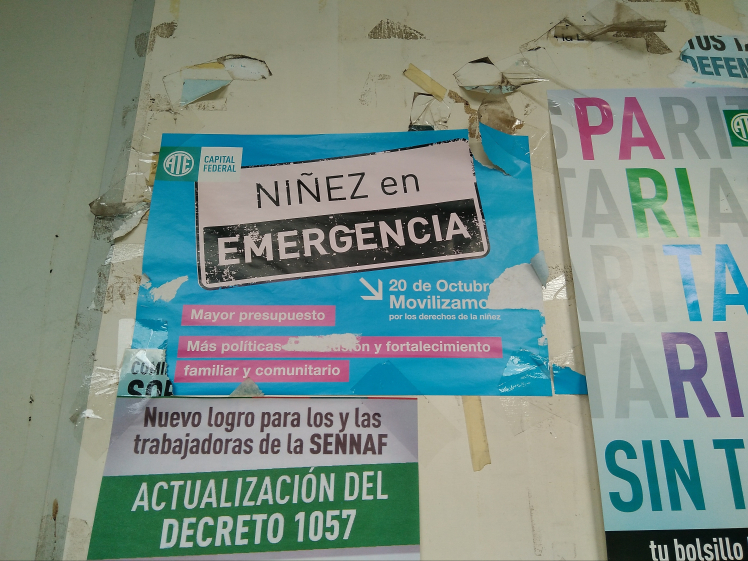 Overwhelmed by the complexity of the problematic and motivated by the possibility of getting in touch with a wide scope of sources, I arrived to the field with a huge agenda. After a fruitful dialogue with other local scholars, who have a wider experience in the field of childhood policies; I realized that I needed to concentrate my efforts and make a better use of my stay in the city. Consequently, I decided to focused my interviews on key actors, whose perspective involves the big picture and at the same time the experience of working with particular cases. Taking advantage of my previous contact with the youth criminal system, and considering that the adolescents involved in that extreme situation are the ones who are the most exposed to deprivations, I decided to explore that scenario first. I organized my fieldwork according to the different areas involved in the problematic: the center of admission, centers of detention, the local articulation program and the judiciary. I conducted thick semi structured interviews with the people in charge of establishing the connections of the adolescents and their families with Children Protection System, its programs and policies and other public services. The interviewed are key informants because they work with adolescents, male and female, who live in different neighborhoods and has different kind of necessities, thus these workers have experience articulating a wide scope of resources. Consequently, their experience is a privileged vantage point to observe social policies’ actual impact on reality. Additionally, during my stay in Buenos Aires went to the National Ministry for Social Development documentary center and to local Libraries to collect data and look for local academic production that is not available outside the country.

To sum up, this summer research trip was fundamental to channel my project. Now I have a clearer perspective for the future steps towards my final research paper; I collected original data but I also incorporated new questions and further challenges.

Florencia Carrill is an MA student in the Center for Latin American and Caribbean Studies.