We didn’t want to be either businessmen or millionaires and less, presidents: Nicargua, Neoliberalism, and the return of the F.S.L.N.

Greetings from Managua, Nicaragua! I am halfway through my two-month stay in Nicaragua’s capital city conducting exploratory research for my dissertation. The opportunity provided by this research visit has been crucial. Nicaragua, one of the poorest countries in Latin America, has had a tumultuous relationship with archival holdings, as wars, natural disasters, and lack of funding have challenged attempts to record the nation’s history. Though I had a project in mind before arriving in Managua, being able to access the archives themselves and see in person what types of holdings are available has been a leap forward in my research.

My project investigates the shifting identity, composition, and support of the Frente Sandinista de Liberacion Nacional (F.S.L.N.) during the postwar period, the 1990s and 2000s. As the Cold War tapered off at the end of the 1980s, so too did the U.S.-backed Contra war against the Sandinista regime in Nicaragua. The Sandinistas, confident in their popular support, held elections in 1990 only to suffer a surprising loss against an opposition candidate. The Sandinistas lost two more presidential elections before finally rising to power again in 2006. While Daniel Ortega always played a central role in the F.S.L.N. organization, during the 1980s he was one of a cadre of leading Sandinista figures. By the 2006 election, nearly all his former compatriots had fled the party and he was the unquestioned presidential candidate. Ortega has gone on to win every election since 2006, bending constitutional and electoral rules in the process, causing many scholars, journalists, and former Sandinistas to accuse Ortega and the F.S.L.N. of caudillismo. Hence, my project follows Ortega, the Sandinistas, and their bases of support throughout the transitional years to tease apart the shift of the Sandinistas to the Danielistas. 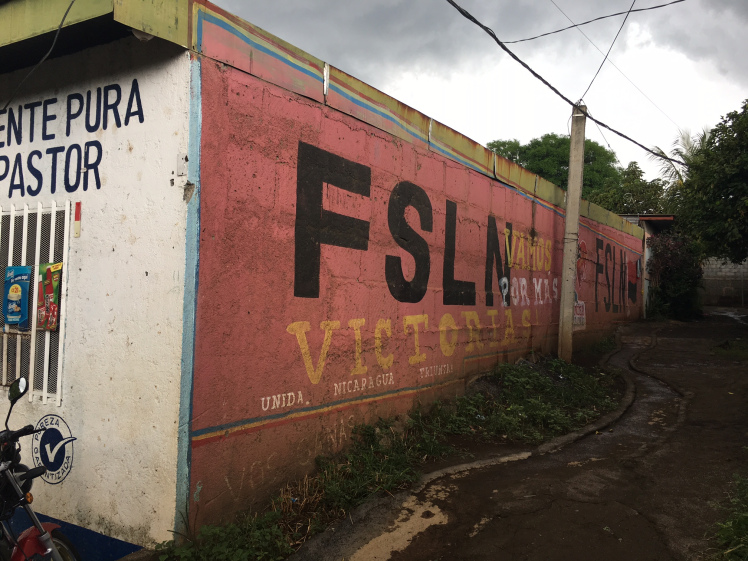 So far my focus has been on archival research. At the Biblioteca Nacional Rubén Dario I have accessed newspapers from throughout the 1990s and 2000s of the three major dailies: La Prensa, El Nuevo Diario, and the Sandinistas’ Barricada. The Biblioteca’s lenient photography policy means that I will be returning to Indiana with hundreds of articles which I’ll be able to pore over at my leisure. My research has also brought me to the Instituto de Historia de Nicaragua y Centroamérica at the Universidad Centroamericana, just a $1.50 taxi ride from my apartment. The Instituto has substantial holdings, and the helpful staff has guided me towards some fascinating documents published by the F.S.L.N. and other organizations. Just today I found a Anteproyecto published by the Sandinistas in 1991, just a year after their devastating electoral loss. The document shows them navigating a tumultuous period in the party’s history: seeking to explain their loss of support and in the process of distancing themselves from the militaristic language and imagery which had served them throughout the 1980s.

As with many projects, I have also been surprised by the contemporary resonances of the time period I’ve examined. While themes of populism and authoritarianism are baked into my project, I have been especially fascinated by the role of journalism in the elections. In the present-day United States we speak about information bubbles, as individuals increasingly encapsulate the information they receive to resonate with their own political, social and cultural beliefs. Nicaragua of the 1990s was no different, and perhaps even more extreme. The Sandinista’s ran their own newspaper, Barricada. Meanwhile the opposition candidate, Violeta Chamorro, was the director of the largest daily, La Prensa. Reading the two side-by-side is an exercise in cognitive dissonance, as each newspaper provides completely divergent information about the upcoming elections. Different statistics are cited, different events photographed, and different individuals interviewed, all to create separate narratives of imminent victory. To elevate the absurdity even more, the journalistic conflict was also a family one: every newspaper in Nicaragua at the time was directed by a member of Violeta Chamorro’s family. It is a reminder that the events and issues that we struggle with in the present day always have historical roots which are deep, complex, and fascinating.

I look forward to discovering many more stories in the coming month.

Christopher Jillson is a PhD student in History.