In the early twentieth century, a Spanish friar and historian, Luis G. Alonso Getino, discovered two collages in the room where Santa Rosa of Lima (1586-1617) had died approximately three centuries before. The striking, unsigned works contained a letter to a confessor and a description, in the form of mystic poetry wrapped around impaled hearts, of a spiritual journey during which Rosa’s soul was first wounded then joined to her Beloved. Getino authenticated the works through a series of analyses, including comparison with some of Rosa’s extant letters. Nevertheless, to my eyes, first trained as an artist, some discrepancies exist within these pieces. My doubts about these discrepancies sparked an intricate—might we say “obsessive”?—exploration of the material aspects of the works. By reconstructing the order in which the paper, fabric, and writing of the collages were applied, I’ve sought to resolve these contradictions. But I could not finalize my conclusions without seeing the collages in person. The Tinker Grant allowed me to visit Lima and witness these works firsthand. 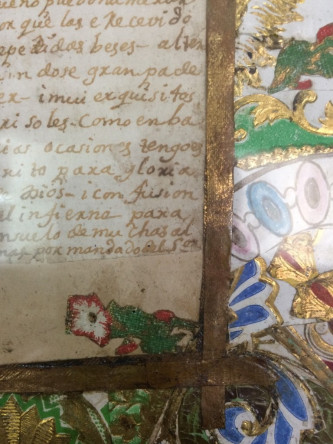 Since Lima was the seat of one of two Spanish viceroyalties during the early modern period, complete with its own Inquisition office, the city has many significant archives, including the convents themselves. While I’ve focused mostly on the convent archives, one of my initial goals was to familiarize myself with the places where Rosa lived and visited. Through these initial explorations, I discovered documents in another convent about which I was unaware. In addition, I have occasionally supported my inquiries with visits to the National Library of Peru. As fortune would have it, a new coffee table academic book was released just after I arrived to the city, and this proved most helpful to advancing my study about the first saint of the Americas.

Working in the Lima convents has been challenging at times, since cloistered nuns are not always enthusiastic about allowing outsiders into their space. My preliminary visits to two different convents entailed extended conversations through a solid wooden divider with the nun on the other side. After a couple of talks, the mother superior of the Santa Rosa Convent allowed me to see the two poetry-laden collages. However, I only had a single day to study them, as the nuns are busy getting ready for the jubilee coming up next month honoring the four-hundred year anniversary of Rosa’s death.

In the convent, the framed pieces were placed on a table with glaring florescent lights above. Not the ideal situation for photography, I mainly focused on taking close-ups and extensive notes, and making sketches. Moreover, the convent possesses two of Rosa’s letters, so I was able to study her other works simultaneously. This was a rare opportunity to examine these extraordinary pieces. Earlier, I also had the opportunity to meet with a leading scholar from Lima who is an expert on Rosa of Lima. 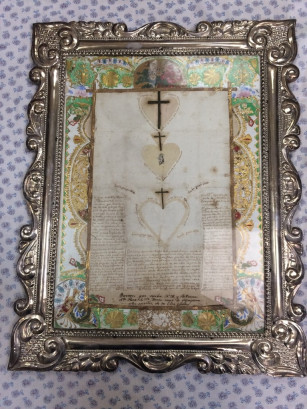 Soon after, I was given permission to observe another one of Rosa’s letters in the Convent of St. Catherine of Siena. That same day, I was able to visit a small museum with another one of Rosa’s missals. My last week will be spent doing follow-up work in the convents and pursuing an unpublished manuscript of the twentieth century. The visit has been quite fruitful!

I am grateful to Indiana University’s Center for Latin American and Caribbean Studies, to the Tinker Foundation and particularly to the monjas of the city of Lima who have graciously allowed me to observe their archives.

Rowena is a second year doctoral student in Religious Studies and Comparative Literature at Indiana University.