Incarceration and the Migrant Experience

On the first day I was at the Brothers on the Road migrant shelter in Ixtepec, Oaxaca, in southern Mexico, I was slightly surprised to be addressed in English when I sat down for dinner at a table with several migrants from Central America. The person who spoke with me, José, it turned out, had lived in the US for fifteen years before being deported a few years ago. Later, when I interviewed him, I learned that José has three daughters and a partner in the US, and is now trying to get back to the US to reunite with his family. In fact, this trip is his second time trying to get back home. Last year, he walked for twenty-six days trying to get to the US from Honduras. On that trip, he was attacked and robbed by police while crossing Mexico. When he finally got to the US-Mexico border, the coyote he had contracted to help him get across the border set him up. He found himself being forced to carry a sixty pound backpack full of drugs across the desert for a drug cartel. He tried to refuse, but they told him it was too late.

The journey across the desert took several days, and before it was over the cartel José was forced to carry drugs for got into a gunfight with another group of traffickers that was using the same route. After that, the group he was with had to hide out for four days in the desert, without food. He was only allowed two sips of dirty ditch water each day while they waited. Eventually, José and another migrant ran away and flagged down the Border Patrol in order to escape their captors. After all that, they were caught and detained by the Border Patrol, and in order to avoid drug-trafficking charges José agreed to give information on the traffickers he was caught with. After providing the information, however, the prosecutor told him he would have to testify in court. José refused, knowing that if he did he and his family would likely be hunted down and killed by the same organization that forced him to carry the backpack full of drugs across the border. Instead of being allowed to apply for asylum, he was detained in a immigrant detention center in Florence, Arizona operated by Corrections Corporation of America for fourteen months, charged with re-entry and a DUI from ten years ago.

After fourteen months of detention, during which he never had access to legal aid and experienced abuse and harassment by the facility staff, he finally signed a document agreeing to be deported and not return to the US for twenty years without permission. He was actually deported two months ago. Now he is waiting at the migrant shelter for his application for a humanitarian visa to traverse Mexico without fear of deportation to be processed, because he was already assaulted and robbed before reaching Oaxaca.

José told me he cried in his cell in the detention center; that all he wants is to hug his daughters and play with them, to go back to work in construction so he can support his family that remains in Honduras.

José’s situation and the experiences he has had with deportation, detention, and the dangers of the migrant route through Mexico are not unusual. In the week I spent at the Brothers on the Road shelter, I spoke with several other people who had been deported from the US recently. One of them was a man in his fifties, Gustavo, who has lived in the US for thirty-five years, owns a house, and has his whole family – a wife, three daughters, and his brothers – in the US. He said he barely knows his country of origin, Honduras. He was deported this past December after being arrested police while parked outside of his workplace. They didn’t give him a ticket, just sent him straight to ICE. Gustavo, too, was attacked and robbed on his way north, and was waiting for the same paperwork as José to be processed when I spoke with him at the shelter.

Another person in a similar situation, Eduardo, is from El Salvador. He was deported three months ago, after being held in detention in a local jail for six months. His girlfriend in the US is pregnant; their child is due in September. He is hoping to make it back to the US before his child is born. Eduardo was arrested at court and placed in deportation proceedings after spending five days in jail to fulfill a minor ticket. 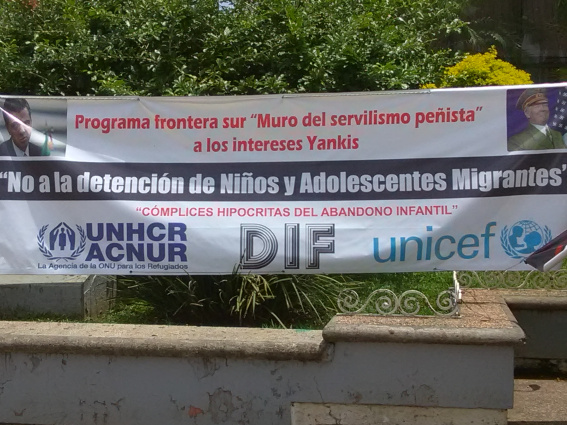 The experiences that José, Gustavo, and Eduardo have had with immigration enforcement in the US and on the migrant routes from Central America to the US, and the fact that they are risking having all of those experiences, and worse, again, in order to be back with their loved ones, show clearly how violent US immigration enforcement is. Their experiences with the ‘deportation regime’ in the US, however, only describe the elements of anti-immigrant state violence that are most close to home for us in the US: detention and deportation. The objective of this article to briefly describe some other aspects of the immigration control regime deployed by the US, and to argue that US intervention in the security and economic affairs of Guatemala, El Salvador, and Honduras, is a primary motivating factor of mass migration from those countries.

Another aspect of anti-immigrant state violence that has finally become a topic of widespread conversation as a result of Trump’s wall proposal, is the ongoing militarization of the US-Mexico border. The wall proposal, however, is more a symbol of the dominance of white supremacist ideology than anything else. Past federal and state policies have already built walls and fences across much of the border, and the migration policing strategy of Prevention through Deterrence forces migrants to cross the desert rather than in urban areas with the express intent of making crossing more difficult and dangerous. The predictable and well-documented result of the militarization of the southern border is an increasing migrant death toll. Increasing militarization of the US-Mexico has been a consistent policy element of Democratic and Republican administrations since the 1986 Immigration Reform and Control Act, which was the Reagan administration’s response to the threat posed by refugees fleeing political violence in Central America, where the US had for decades been arming and training brutal and genocidal military dictatorships to crush social, labor, and guerilla movements. In the 1990s border militarization picked up pace, and the strategy of Prevention through Deterrence was adopted, in response to the increase in migration from Mexico after the North American Free Trade Agreement put millions of Mexican farmers out of work, increased food prices, and threw nineteen million people into poverty over the course of ten years.

A third element of anti-immigrant state violence that is discussed even less is the externalization of US borders in Mexico and Central America. Externalization of US border is being organized through the Southern Border Program in Mexico and various Interagency Task Forces in Central American border zones, which are to large extent funded by the US. The US and its institutional partners in Mexico and Central America have strategically made undocumented migration through Mexico to the US more difficult and dangerous since the 1990s, but only in the past decade has externalization of US borders become a major policy priority. In 2011, US Assistant Secretary of Homeland Security for International Affairs Alan Bersain said, “The Guatemalan border with Chiapas is now our southern border,” and that year the US devoted $50 million to the Mexico-Guatemala-Belize Border Region Program, the first major expenditure on the externalization of US borders. The process of externalizing US borders has only continued since then, and the current Department of Homeland Security Secretary John Kelly recently stated that “[b]order security for the United States starts 1,500 miles to the south (in Central America).” In 2014, under US influence, Mexico implemented the Southern Border Program, which has dramatically increased immigrant detention and deportation in Mexico through raids and checkpoints in the southern states of Tabasco, Veracruz, Chiapas, and Oaxaca. That year, 68,541 undocumented minors were apprehended at the US-Mexico border, the vast majority of whom were fleeing conditions of generalized violence in Guatemala, El Salvador and Honduras. In response to that massive humanitarian crisis, Texas Governor Rick Perry mobilized the National Guard to send a message that the border was closed, the patriot militia organization the Minutemen mobilized an anti-immigrant movement to patrol and hold rallies on the border. The Obama administration re-authorized the detention of undocumented immigrant children and provided $122 million in financing to Mexico for the Southern Border Program. In a relatively minor, but life-saving for many, concession, Obama also authorized the Central American Minors (CAM) program, which provided relief from deportation to several Central American minors who had been denied refugee status. The CAM program has recently been terminated as a result of Trump’s executive orders on immigration control. Though in 2015, the US registered a decrease in the number of unaccompanied minors apprehended at the border with Mexico, in 2016 the apprehension rate again climbed to nearly sixty thousand. The majority of these children presented themselves to the Border Patrol, seeking asylum. By 2015, because of the Southern Border Program, Mexico was apprehending more unaccompanied minors than the US. Note that the cited numbers refer only to the apprehension rate only of unaccompanied minors; that is, people under the age of 18 traveling alone. It does not include individual adults or families.

The final element of anti-immigrant state violence deployed by the US against Central Americans that I would like to draw attention to points us toward an analysis of the conditions motivating mass migration from Guatemala, Honduras, and El Salvador, and the role of US foreign policy in producing those conditions. The violence I am talking about here is that carried out by the US judiciary, in relation to Central Americans’ petitions for asylum. According to US asylum laws, refugees must be able to prove a “significant possibility” that they “have been persecuted or have a well-founded fear of persecution on account of. . .race, religion, nationality, membership in a particular social group, or political opinion if returned to your country.” In the case of Central Americans, the majority of those fleeing violence are not persecuted on the basis of any of the categories specified by US asylum law, but from generalized criminal violence, especially sexual and gender violence, that the US and Central American governments are complicit in fostering and unleashing. As such, it would be extremely difficult for Central Americans to successfully gain refugee status, regardless of the conditions they face in their countries of origin, even if they were afforded correct due process. Under the Obama administration, Central American asylum seekers were systematically denied due process, to such an extent that children of three and four years old were sometimes forced to represent themselves in immigration court, and under the Trump administration that refusal of access to due process is intensifying. Though it is slightly easier for Central American refugees to receive asylum in Mexico, the same general description that I have provided of the situation for Central American asylum seekers in the US applies to those seeking asylum in Mexico, in large part due to US pressure and financing.

Nick Greven is an M.A. student in Latin American and Caribbean Studies.